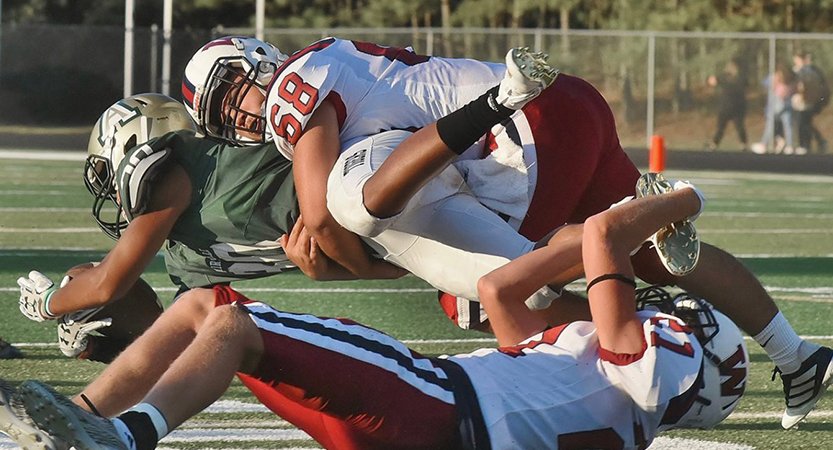 Friday’s Woodland-Adairsville scrimmage featured a handful of long touchdown runs that broke up the monotony of sloppy offensive play. Those few scores did little to placate the teams’ head coaches, who were hoping to see more crispness in the final dress rehearsal before next week’s regular-season openers.

While the new scoreboard at Tiger Stadium read 0-0 at the end of the game, Woodland supporters will no doubt remember that their team found the end zone three times versus two touchdowns for Adairsville in what amounted to a 21-14 win.

“On the offensive side of the ball, what I was hoping to see tonight was for us to be able to sustain drives and be able to eat the clock,” Wildcats head coach Tony Plott said. “We had a couple of long runs, but other than that, we didn’t do a whole lot. That’s kind of disappointing right now.”

He added, “From the sideline watching the game — I’ll see tonight for sure — it was a little bit of everything. I think the offensive line had some missed calls and some missed blocks. I think our backs might not have hit the holes correctly, maybe ran too wide or cut back too soon. Everything has to be better, not just one aspect. Our blocking, our vision and carrying out our fakes, everything like that has to be better.”

Neither offense got much going in the first quarter. Until the period’s final few minutes, the most exciting play came on a rare double turnover. Adairsville starting quarterback Conner Crunkelton saw his first pass attempt intercepted, but he remained under center for the next snap, as Woodland fumbled the ball moments after the pick.

Following the strange turn of events, the Tigers drove down inside the 5-yard line. However, the Wildcats recovered a fumble to keep the game scoreless. Woodland eventually broke the deadlock on senior Demarcus Williams’ 60-yard burst up the middle on the second play of the Wildcats’ third drive, which followed a pair of three-and-outs. Sophomore Jordan Holbrook made his first of three line-drive point-after tries for a 7-0 lead.

Woodland’s fourth possession also lasted three plays — the last of which was a 74-yard touchdown run by Asa James. The sophomore sprinted down the right sideline before breaking a handful of tackles over the final 15 yards of his highlight-reel play.

Aside from those explosive plays, the Wildcats’ first-string offense did little of note. Woodland picked up just one first down in the opening half, and the Region 7-AAAAA member didn’t run a play in Adairsville territory until the 1:24 mark of the second quarter.

“We really didn’t feel like we’d have as good of success playing in our regular personnel package,” Adairsville head coach Eric Bishop said, “but throughout the first half, we started finding that we can play in that and be successful. When they hit you with them two big ones, you have to do something different. We just went to base personnel, ran our regular defensive schemes and started to have some success.”

Despite Holbrook leaving a 36-yard field goal attempt short in the waning seconds, the Wildcats carried a 14-0 advantage into halftime. The Tigers, meanwhile, had been better at sustaining drives, but Adairsville had two fumbles and an interception in the first half.

Both teams kept their starters in to begin the second half. Woodland’s defensive front continued to torment Crunkelton, tossing him down behind the line of scrimmage on multiple occasions.

“I think our defense flew around,” Plott said. “I think our front four played as well as we thought they would. At times, they looked really, really good. At times, they dominated the game. On the perimeter, we need work there. But overall defensively, I thought we played really well.”

After forcing a Woodland turnover near midfield, Adairsville found the end zone on a long touchdown run of its own by sophomore Eli Agnew, who also had a 33-yard carry in the first quarter. Preseason all-state punter Emanuel Lopez knocked the extra point between the uprights to pull the Tigers within 14-7.

The Wildcats’ longest sustained drive of the opening three quarters didn’t yield points, but Woodland’s first series of the fourth quarter led to the longest scoring play of the game. Following a 5-yard loss on first down, freshman Christian Vera broke off a 90-yard touchdown run.

Adairsville answered back with the game’s only short rushing touchdown. Freshman quarterback Chris Roper crossed the goal line to pull the Tigers within 21-14.

“Let’s look at the things we wanted to evaluate coming into tonight,” Bishop said. “We wanted to play with tempo on offense, and we did a pretty good job of that. We got a little sloppy, especially on the offensive line. That creates a snowball running downhill. It tends to create problems with the quarterback. We had some snap issues. Big Dave Adams is out with a broken collarbone, and we don’t know how long it will be before he gets cleared. We’ll have to solve those problems in this coming week.

“Playing with toughness, we were very proud of the way we played defensively with 11 hats to the football. I feel like we’re miles ahead from a tackling standpoint. They hit us for two big, long runs — not taking anything away from them.”

Both coaches will hope to see marked improvement, when the regular season begins next week. Adairsville will head to Chattooga, and Woodland will host Southeast Whitfield. The Bartow County teams won both matchups last season.

“We hope to improve a great deal,” Plott said. “We’ll watch the film with the kids, point out the mistakes, fix them and show them how to correct it. We’ll spend Monday making our corrections and game planning for Southeast Whitfield.”

Said Bishop, “Obviously, there’s things we have to look at. We had turnovers; we had two fumbles there in the first half. We’ll have to address those issues. It wasn’t one person. It wasn’t one position group. Hopefully, it’s something that’s fixable. That’s what I just got done telling the kids, we feel like the problems we see are not so much effort problems. They’re fixable. We show it to them on film, and then we go out next week and fix it on the practice field. Hopefully, we’re a lot better Week 1 than we were tonight.”