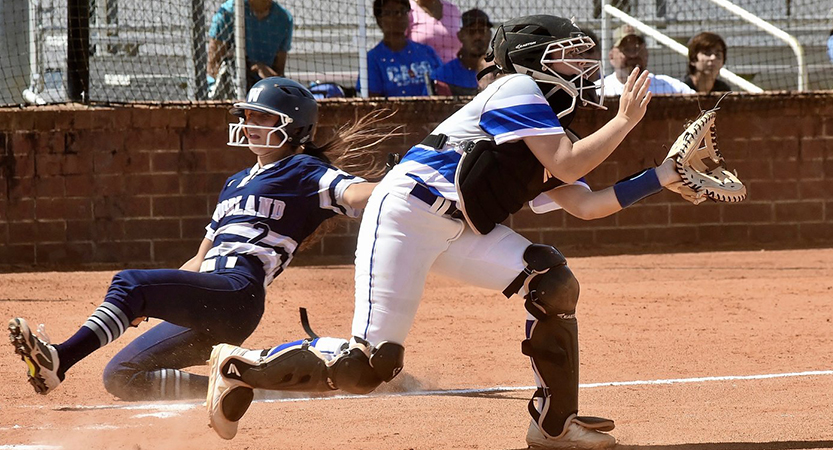 But if Roberts was disappointed with the Wildcats offense, then his friend, Alan Loper, who is the head coach of Chamblee, was probably quite upset with the Bulldogs’ lack of timely hitting.

Woodland will carry a 12-game winning streak into next week’s meeting with Region 3-AAAAA champion Whitewater, which swept Bainbridge Tuesday.

“I’m proud of them,” Roberts said. “To come on the road in the state playoffs and win is big, especially against a team that won 21 games.”

Credit goes mostly to the stellar pitching of sophomore Lainey Baker, who pitched two complete games, and some clutch defense by Woodland (21-10) that kept Chamblee (21-8) from leading at any point in either game.

The Wildcats had to hang on late in Game 1, as the Bulldogs mounted a rally in DeKalb County. A leadoff single led to the home team having a runner on second with two outs. Chamblee’s leadoff hitter Savannah Russell dropped a hit down the left-field line to drive in a run, but Woodland outfielder Hannah Miller made a heads-up play, throwing to Bella Carnes at second base to catch Russell trying to stretch the play into a double to end the game.

“That was huge,” Roberts said. “[Miller] made a good play there.”

Miller made another huge defensive play in Game 2. Playing right field this time, The junior snared a sinking liner and fired to first base to double off a runner to end the fifth inning.

Baker wasn’t completely dominant but always made the pitches that she needed. She allowed three hits and five walks in the opener before giving up six hits and a walk in Game 2. She struck out 25 batters on the day, including 14 in Game 1.

The showing by Baker and her defense wasn’t enough to keep Roberts from aging during the doubleheader.

“We made some defensive plays, and [Baker] was good, as usual,” Roberts said. “We knew coming in they were going to be good. Getting some early runs was huge. I have enough gray hair.”

Loper would likely feel similarly, although he might have been even more aggrieved with his team’s defensive struggles than anything else.

Woodland scored just one earned run across the two games. The Wildcats struck for two unearned runs with two outs in the fourth inning of Game 1. Outside of a solo home run by Morgan Cooper to kick off the scoring, Chamblee gave a helping hand on four of five Woodland runs in Game 2.

“I’m glad to move on, but we’ve got to get better at the plate,” Roberts said.

To be fair, the Wildcats managed to put the ball in play, particularly in Game 2, to force the Bulldogs to defend.

After Cooper’s blast over the fence in left field with one out in the second inning, Kailey Baker, who was a rock behind the plate for all 14 innings, reached on an error. Miller followed with a single, and Cassie Jones walked to load the bases. A sacrifice fly by Brianna Hill scored courtesy runner Michiah Hicks for a 2-0 lead.

Chamblee, which played as the visitors the second game, got a run back in the third. But a single by Kailey Baker and a defensive miscue on a Miller groundball led to Hill’s hit to load the bases. Carnes managed an RBI groundout to restore the two-run lead.

Miller reached on another error in the sixth inning. She stole second and scored on Hill’s run-scoring hit. Hill scored later in the frame on a fielder’s choice for a 5-1 advantage that allowed Roberts to breathe a bit easier in the seventh.

Woodland managed just two hits — both by Carnes — in the opening contest. The team’s first hit came in the fourth inning, as Carnes singled to left field. The senior stole second and moved to third on a groundout.

With two outs, Kendyl Hardin sent a hard grounder to third. The junior reached on the miscue, while Carnes came home with the day’s first run. Cooper was hit by a pitch before Kailey Baker reached on an error to load the bases. Hardin eventually scored on a passed ball for the Wildcats’ second and only run of the win.

“I’m going to give them [Wednesday] off, and then we’re going to come back in Thursday, Friday, Monday and hit. May come Saturday, too,” Roberts said. “Sometimes pitchers have your number. I thought their two pitchers were good. I thought they mixed it up and changed speeds a lot, hit corners.”

Chamblee’s Lily McCord and Margaret Axelson threw well in the first and second game, respectively. Luckily for Woodland, Baker was able to outduel both of them.

After his ace tossed 127 pitches in Game 1, Roberts wasn’t sure if Baker would be able to start the second contest. She had told him Monday that she would do whatever he asked, and she managed to get through Game 2 on 114 pitches.

While nobody from Woodland — players, coaches or parents — will be upset to have finished off the sweep, Baker will certainly be thrilled to not have to return to Chamblee for a winner-take-all Game 3.

“Showed a lot of character there,” Roberts said of Baker. “She battled. She threw a lot of pitches that first game. That’s what I was kind of concerned about. I wanted to see how she was after that first game before I even did anything.

“She’ll have a good day off [Wednesday], and I won’t let her do anything the rest of the week.”