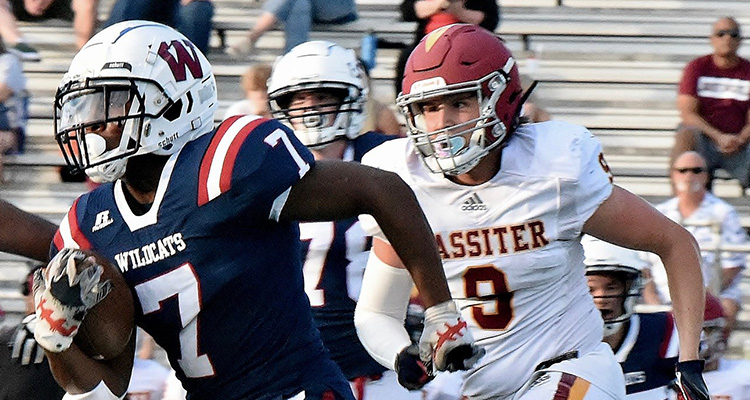 Woodland and Lassiter fought to a 7-7 draw during an Aug. 12 scrimmage.

The scrimmage featured a few big plays and mistakes by both sides. The starters for both teams unofficially combined for 13 penalties with Woodland being called eight times for 40 yards.

The positive side for the Wildcats is that they bounced back after Lassiter’s score and competed for the entire game. Woodland Coach Brandon Haywood was pleased with his team’s effort, but said there is still a lot to work on.

“We played better than we did in our last scrimmage [versus Adairsville] and we communicated a lot better,” Haywood said. “But we still didn’t execute to the level that we should. We left too many points out there and we had too many self-inflicted wounds. Turnovers and penalties will get you beat. But we played hard and played better.”

Woodland running back Isaiah Livsey had a solid game, running for 133 yards on 12 carries — including a 75-yard touchdown run.

“He had a good game for us,” Haywood said of Livsey. “He is a young player and he’s still learning about angles and things like that, but if he continues to increase his football IQ he’s got a chance to be a heck of a player for us.”

The Wildcats defense also had a solid night, holding the Trojans to just one score.

“That one score was a communication error, but they played well,” Haywood said. “We preach flying to the ball and they are buying into that. That’s a culture that we are trying to instill.”

Lassiter started off the scrimmage with a long drive down to the Wildcat 29, but Woodland held firm on fourth and 1, dropping the Trojans running back for a two-yard loss.

Woodland then fumbled the ball on its first possession, but the Wildcats forced a punt.

It was then Woodland’s turn for a long drive, but this time it was the Trojans defense forcing a turnover on downs on fourth and short.

Now into the second quarter, the two teams exchanged punts, but then Lassiter marched on a drive down to the Woodland 28 with the help of a pair of long passes.

The Trojans then connected on a 28-yard touchdown pass to go up 7-0 with 5:48 left in the first half.

It took just one play for the Wildcats to respond. Taking the handoff from quarterback Brelace Williams, Livsey found some open space on the left side of the line, made a few cutbacks to the right to avoid tacklers and raced to the end zone for the score. Nick Miranda kicked the extra point to tie the game at 7-7.

The score remained tied at the half and nobody scored in the third quarter.

The starters left the game in the fourth and both teams used younger players for the rest of the game. Neither team scored again and the game concluded in a 7-7 tie.

Among other players making plays in the scrimmager were Ray Glover, Can Willaims, Chase Carson, Jaeden Smith and Kwadrus Wilson.

The next time the Wildcats take the field will be for the regular season opener at East Paulding. Game time is 7:30 p.m. on Aug. 19.