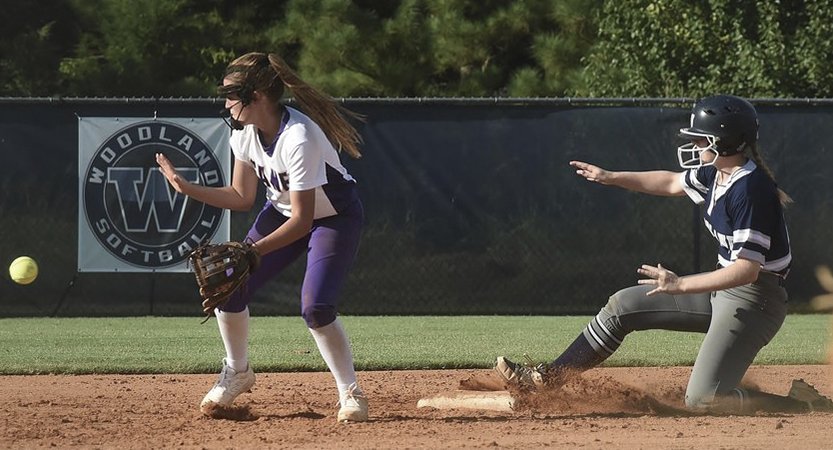 Cass came out strong with a run in the top of the first inning, but Woodland pretty much dominated the rest of the way in Tuesday’s rivalry game.

However, it took the Wildcats until late to put the Colonels away in a 6-1 home victory in Region 7-AAAAA action. But even after extending the lead late in the contest, Woodland head coach Colman Roberts didn’t feel relieved until the teams were shaking hands after the game.

“They will never go away — ever,” Roberts said of Cass. “They will play until the last out. So getting those runs were huge.”

With the win, Woodland improves to 3-0 against its neighbor, having defeated Cass by an 11-1 margin on Aug. 31 and 8-5 on Sept. 7 in the Bartow County tournament championship game.

In both of those contests, the Colonels (10-12, 5-7) took a 1-0 lead in the first inning but didn’t score the rest of the way. Alexis Woods had a Little League home run to begin the first matchup. This time around, she opened the game with a double, moved to third on an error and scored on a groundout by Rachael Lee.

Cass managed three walks and one hit the rest of the way.

“This season, we’ve said we play better away than we do at home,” Colonels coach Taylor Weeks said. “When we play away, we tend to come out, score and stay on top. Today, we scored in the first inning, and then didn’t execute.”

After going down in order in the first inning, cleanup hitter Kendyl Hardin sent a towering flyball out beyond the center field fence to tie the game in the second. Hardin’s third home run of the season tied Morgan Cooper for the team lead and kickstarted a three-run frame.

Consecutive errors put runners on the corners for Cassie Jones, who came through with a well-placed, opposite-field single. Cooper scored on the hit to give the Wildcats the lead. With one out, Allyssa Motes dropped a soft flyball into the outfield grass, allowing Hannah Miller to race home for a 3-1 edge.

Miller was the one with the clutch hit in the fifth inning to provide the first insurance run for Woodland, which received hits from eight of its nine starters. Her double to the fence sent Ansley Evans home from second base. In the sixth, a fielder’s choice groundout to Lee in the circle scored Michiah Hicks, and a single by Evans brought home Bella Carnes.

Kylee Hembree picked up Cass’ second and final hit of the night, leading off the seventh. She was also involved in one of the biggest plays of the game in the fourth inning.

With the Colonels facing a two-run deficit, Hembree drew a two-out walk. The sophomore tried to advance all the way to third base on an infield groundout, but the Wildcats threw the ball around the horn to nab her at third base.

“I think that was huge,” Roberts said. “That was a big turning point.”

After allowing the unearned run in the first inning, Baker pitched outstanding in tossing a complete game. She finished with nine strikeouts and just five baserunners allowed.

She had a couple of rocky opening frames last week, but Baker has proved to be the rare pitcher who gets better the further into the game she gets.

“People are laying off the riseball early on her, so getting ahead in counts early is big,” Roberts said. “… I do think she gets stronger as she goes.”

Baker’s counterpart, Lee was also solid in the circle over 5 2/3 innings. She gave up 10 hits but did not walk a batter and induced several easy popups.

“I thought she was locating the ball really well,” Weeks said. “She threw a great game. There were some plays we could have made behind her that gave them some unearned runs. Rachael did a good job.”

Unfortunately, Lee didn’t get a chance to finish out the game after being hit by a line-drive off the bat of Hardin. The ball struck Lee’s left hip and left her in a heap at the edge of the circle.

“It’s a bone bruise on her hip,” Weeks said. “That girl just came back from a broken sternum, so she’s tough. I have no doubt she’ll work her way back out here. I just hope it’s not too serious.”

One of the most resilient players in the county, Lee managed to walk off under her own power. Coincidentally, the sophomore also left last year’s meeting at Woodland injured after taking a liner off her shin.

Lee probably doesn’t want to hear this, but the result furthers Woodland’s chances of hosting the region tournament at the conclusion of the season. The top two teams in the league play in a best-of-three championship series, with the third-ranked team holding the tourney to produce the region’s other two state qualifiers.

The Wildcats currently sit all alone in third, although the team has four region games left, including tough road trips to Villa Rica and Hiram.

“Everybody from top to bottom right there is all in the mix,” Roberts said. “… I told the girls before the game, we can’t worry about what East Paulding does or Carrollton does, what socks we wear or what bow we wear. We have to worry about us and who we’re playing.

“We have to finish strong and hopefully we get to host the tournament here if we get to be the three seed.”

It would shape up to be one of the most exciting region tournaments in recent memory with Woodland, Hiram, Villa Rica, Cass, Kell and Paulding County having beaten up on each other throughout the season.

At least one of those teams in the middle of the pack is looking forward to the chance to compete for a state bid.

“We just need to peak at the right time,” Weeks said. “I think we’re on our way to that.”