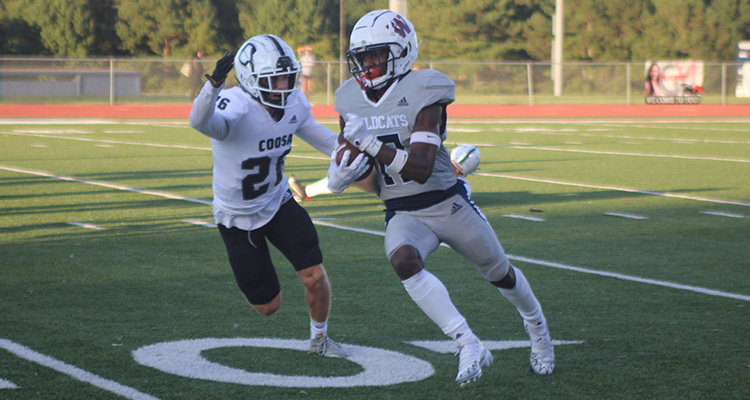 There’s no reason to downplay the Woodland Wildcats’ dominant win over Coosa on Aug. 26.

The boys in red, blue and silver didn’t just wallop their visiting opponents — they positively annihilated them in a 34-0 thrashing.

“It’s a testament of coming out here and responding,” said Brandon Haywood, who recorded his first victory as the head football coach for Woodland in his team’s home opener for the 2022 season.

“I think they stepped up to the challenge and the way they prepared themselves, both coaches and players.”

With neither teams managing to score by the midway point of the first quarter, it — momentarily — seemed like the contest was destined to be a low-scoring affair.

A Woodland interception put the Wildcats near the Coosa 10, and it wasn’t long before Isaiah Livsey pushed the pigskin in to put the home team up 7-0.

The Wildcats defense stopped Coosa again around midfield, and it didn’t take much time for Woodland QB Brelace Williams to tag receiver Jay Walker to make it 14-0.

“Our quarterback was able to step in and make some throws and make things happen down the field,” Haywood said.

The hits keep coming for (and from) Woodland, as their defense produced a fumble recovery for an easy scoop and score for defender Kwadrus Wilson.

“Kwad is making a name for himself,” Haywood said. “I think he has a chance to be the best defensive lineman in our region, and I’ll stand on that.”

Woodland led Coosa 21-0 halfway through the second quarter, with yet another Coosa turnover giving the Wildcats prime real estate on the gridiron.

Ray Glover collected a rushing TD shortly thereafter, but a failed PAT meant the Wildcats had to make do with a 27-0 lead instead of the 28-0 shutout.

Just when things looked like they couldn’t get any worse for Coosa, their offense coughed up the ball yet again. Livsey then notched his second touchdown of the game to make it 34-0, Woodland, with about three minutes left in the second.

“He’s a huge asset, especially just being a sophomore,” Haywood said. “He has a lot of weight on his shoulders, I told him I want to feed him the ball as much as possible. And he responded.”

34-0, Wildcats, would remain the score heading into half time.

“Without the help of our offensive line and the way they controlled the line of scrimmage, none of our backs would be successful,” Haywood said. “Our defensive coordinator had a great plan and they executed it well.”

Both teams took their feet off the proverbial gas pedal in third, as neither squad put any points on the board throughout the quarter.

With the clock running and the final outcome a foregone conclusion, both teams more or less just had to wait for the scoreboard to read all zeroes in the fourth quarter.

Following a scoreless second half, the final score stood 34-0, Woodland.

“I can’t say I’m surprised with the way that they prepared for the moment,” Haywood said. “I think we felt confident, we played confident … it’s just a testament to the work ethic throughout the week.”