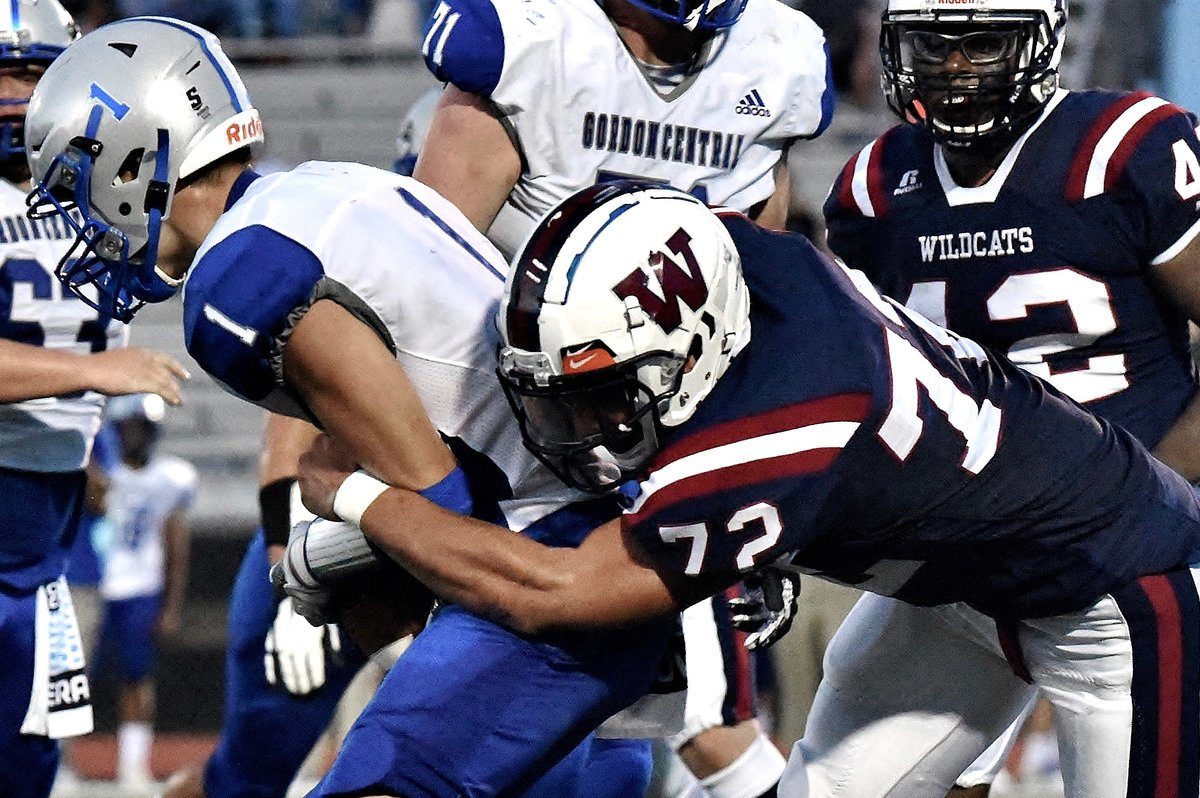 BY TREVOR PRICE
Season openers don’t get much better than the one the Woodland High football team had Friday night against Gordon Central.

The Wildcats blew the doors open early en route to an impressive 43-9 win at Wildcat Stadium.

“It always feels great to get a win, but it’s just our first game of the season. We have to strive for improvement and work to always do better the next time around. It was a great game and the players did excellent, but it’s important to continue with this kind of momentum and aggression,” Woodland head coach Tony Plott said. “We’ve been working hard for this for a while now, and I can see they wanted this victory.”

Woodland didn’t take long at all to get going. On the team’s first series, Isaiah Livsey capped a 10-play, 64-yard touchdown drive with a 1-yard run. The 2-point conversion was good out of the swinging gate formation on a pass to Harlin Morris for an 8-0 lead.

Gordon Central responded with a 29-yard field goal to make the score 8-3 after a Woodland muffed punt put the Warriors in the red zone.

However, the Woodland player who mishandled the punt, Chase Carson, quickly made up for the mistake when he returned the ensuing kickoff 92 yards for a touchdown to make the score 14-3.

With the offense and special teams scoring, the defense wanted to get in on the action and quickly did when Jaiden Smith intercepted a Gordon Central pass and returned it 65 yards for the pick-6. Smith then scored on the 2-point conversion to give Woodland a 22-3 lead with under five minutes to go in the first half.

That would have been enough for Woodland to feel good about itself heading into the halftime break, but the Wildcats weren’t done just yet. They scored on their very next offensive series on a 36-yard touchdown pass from Brelace Williams to Adarrian Wilson to cap a 66-yard drive, making the score 29-3 with 2:13 to go in the first half.

“We’ve taken a good turn offensively, but we still need to maintain focus on defense as well,” Plott said. “But part of this game is striving to make sure you play better at the next game, so holding a tight focus on improvement is key.”

Desperate for a spark, Gordon Central tried an onside kick coming out of halftime. The kick went right to Jeremiah Rhodes, though, who picked up the ball and took it more than 40 yards for the touchdown and a 36-3 lead.

Despite their best attempts, Gordon Central just couldn’t seem to slip out of Woodland’s ferocious grasp. On Woodland’s next possession, after a Carson interception and two big runs by Asa James, Woodland would reach the end zone again for an incredible 43-3 lead.

The Wildcats got the ball right back again when, on Woodland’s kickoff, Gordon Central touched the ball without recovering it. Carson, continuing his big game, picked up the loose ball at the Gordon Central 7-yard line.

That’s when Woodland took out its starters and was not able to take advantage of its field position. Still, though, the Wildcats were easily able to run out the game from there with a running-clock fourth quarter. Gordon Central did score a late touchdown, but it would not be enough.

With an imposing final score of 43-9, the Wildcats celebrated victory with cheers of excitement, while the unfortunate Gordon Central Warriors were sent off with a bleak outcome, and possibly some bruised egos. The Wildcats will hope to carry that momentum into next week, when they travel to take on Osborne.