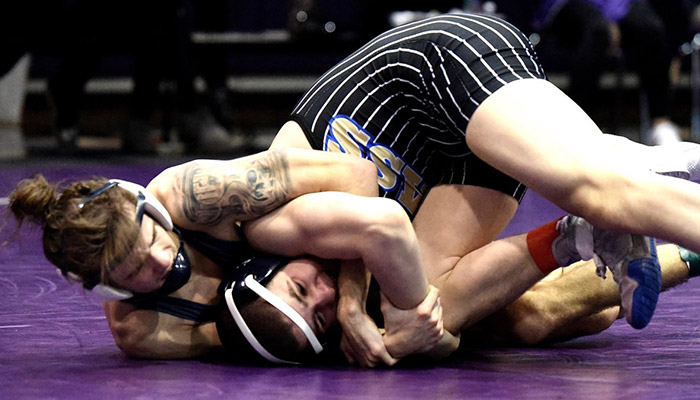 BY NICHOLAS SULLIVAN
A lot has changed in the world since the Woodland wrestling program has won a state title … and that was just last February.

Through all the uncertainty and unpredictability that the 2020-21 wrestling season has brought the Wildcats. As head coach Adrian Tramutola put it Saturday, the team is “right where we need to be.”

That place is on track to win a third consecutive duals state title in two weeks time (and possibly follow it up with a three-peat in February’s traditional event). Saturday confirmed Woodland is still the team to beat in Class 5A.

While the Region 7-AAAAA duals at Cartersville only included six teams, the event produced a finals matchup between Woodland and Cass that may have foreshadowed the state championship that will take place in two weeks at Locust Grove.

“I don’t want to respect any other teams,” Tramutola said, “… but I believe that could be the preview in two weeks.”

Even Cartersville head coach Brooks Gayton believes the Wildcats and Colonels are the cream of the crop.

“I’m pretty certain of it,” he said. “They’re definitely the two best teams in 5A that I have seen.”

In the highly anticipated matchup, the teams split the first eight bouts. All but one of the matches ended in a pin. However, Woodland won each of the final six matches, starting with Easton Bishop’s 6-2 decision in the 126-pound division against last year’s state champion at 120, Bryce Kresho.

“That’s all we’ve been hearing is that they’re going to pin us through the first four weight classes,” Tramutola said, referencing the 106-126 divisions. “We won two of the four. When that happens, you’re in trouble if you’re counting on those four guys. If you don’t beat us in certain weights, the dual is over.”

Despite the defeat, Kresho is confident he can bounce back against Bishop in a future rematch.

“I am disappointed in myself a little bit,” Kresho said. “But I know what I need to do. I’ll work on it; I’ll be back; and I’ll show him that it’s not going to be the same match.”

Kresho believes Cass, as a whole, will use the same type of mindset to continue its push for a state title. And if the Colonels happen to face the Wildcats again in that pursuit, Kresho knows they’ll be ready.

“It’s really helpful for us,” he said of getting to face Woodland Saturday. “… When we see them again, it’s going to be a better matchup, a tougher matchup.”

On the other side, Saturday’s result just seemed to reiterate Woodland’s way of doing things continues to work.

“I don’t know that we ever lack confidence when we go places,” Tramutola said. “It just reaffirms what we think already. … We do think we’re that good. Those kids, they are that good, because they believe in themselves and the training.”

With a new postseason format this year, the region’s third- and fourth-place teams also qualified for the upcoming state prelims. As region champion, Woodland will host a four-team meet next week. Meanwhile, Cass, third-seeded Calhoun and No. 4 seed Cartersville will hit the road.

“We’re in the playoffs, and once you’re in, anything can happen,” Gayton said. “We’ve got another week to work hard, get better in shape and make some coaching adjustments to help our boys make better decisions.

“I think we still have a chance to qualify for the state duals, Elite Eight or whatever they’re calling it now.”

The Canes finished 2-2 on the day. After defeating Hiram, Cartersville suffered a heavy defeat to Cass before bouncing back to take down Blessed Trinity. Calhoun won a thrilling matchup to take third.

Although the Yellow Jackets could have challenged the Colonels for true second, Calhoun seemed content with a third-place finish. It’s an understandable decision, because Gayton, for one, thinks all four teams have a shot to advance out of the prelims and reach the Elite Eight.

“How cool would that be?” Gayton remarked. “I think it’s possible. I really do think it’s a possibility. We’re all really strong.”

In an ideal world, Tramutola would be preparing for a trip to Macon in two weeks time. Unfortunately, that’s not the case this season, when the duals state finals are spread out around the state.

Regardless, his approach to the ensuing two weeks won’t be any different. Why change what has led to back-to-back state titles?

“Whatever it is for us, it’s the same for everybody else,” Tramutola said of the format changes. “This is a new experience for all the teams who qualified today, those that will come [for the prelims] and the eight who get to state. We don’t put too much into where it’s at, the format and the venue. Obviously, I like it being in Macon. As a fan of wrestling, you get to see a lot of good wrestling.

“But wrestling is wrestling. … The circle doesn’t change.”