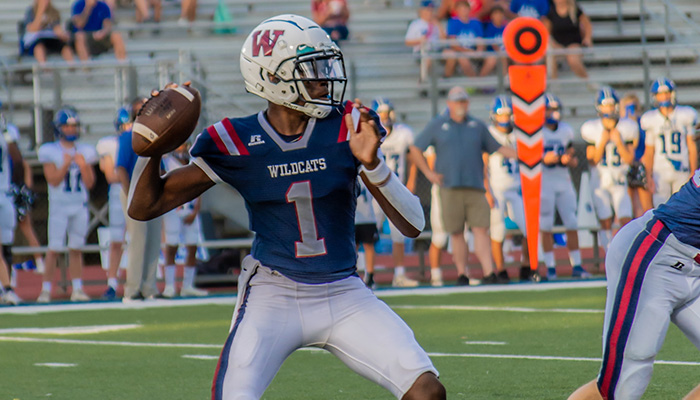 BY SCOTT POWER
Preparation is the key to success and the Wildcats found that out last week.

Woodland dropped an overtime decision at home to Model last week and it was something that Woodland Coach Brandon Haywood could see coming as he was not pleased with the way his team practiced leading up to the game. In a way, with it being an early non-region game, it wasn’t the worst outcome in the world.

“I think we are making a lot of traction to getting it together,” Haywood said. “There is still a buy-in that needs to happen, not to what we are doing, but in how we prepare. That’s the inconsistency (in practice). I think Friday, and thought about it over weekend, but in mindset something needed to happen. I told them on Tuesday, we need to they needed to focus and I think they realized that on Friday.”

It was only one day of practice, but Haywood was pleased with what his team did on Monday, especially considering there was no school because of Labor Day.

“It was a lot better,” Haywood said of Monday’s practice. “Yesterday, even with it being Labor Day, the mental focus was there. We are trying to find the consistency. We had a great Monday practice, despite it being an out of school practice with a lot of distractions.”

Part of the reason for that was the team’s eight seniors.

“Those are the guys that really showed up yesterday, not letting anything slide,” Haywood said. “I felt like they commanded some things (in terms of practicing hard). They showed some leadership.”

Of course, practicing doesn’t automatically mean a win on Friday night, but it gives the Wildcats a better chance to win.

“But I guarantee we will play a lot better if we keep that same focus during the week,” Haywood said.

Woodland (1-2) will try to slay the Dragons this week as the Wildcats travel to Pepperell on Sept. 9. Game time is 7:30 p.m.

The Dragons defeated Model 15-14 two weeks ago, the same team that took down Woodland in overtime this past Friday. Pepperell likes to pound the ball on the ground and they have a running back that can do it well in D.J. Rogers. On MaxPreps he is listed as 5’8”, 162 pounds, and is primarily a speed back, but Haywood said Rogers (No. 11) can do it all from the running back position.

“Their running back is the best we have faced all season,” Haywood said. “We just have to prepare on how to bottle him up. He’s a scat back, one of the fastest in the state. But he is the complete package. He can run by you or run through you. Once he gets down hill, you don’t know wha he will do. That’s why it’s important to stop him before he gets started.”

Rogers rushed for 83 yards on 22 carries with a touchdown against Model. Quarterback Erik Jensen leads the Dragon’s offense and when one of his favorite targets is receiver Gage Owens. Another running back to watch is Demarcus Ragland.

Haywood added that Pepperell has a tough offensive lien and a defense that plays hard and fast with physical outside linebackers.

“They are another solid football team and we can’t make mistakes against these guys to be successful.”

Pepperell is a class A-D1 school while Woodland is a class 5A school, but Haywood said classifications don’t always matter. Woodland, for example, lost to class 2A team Model last week. Class 2A squad Rockmart defeated 5A Cass earlier this year.

“You can’t look at classification,” Haywood said. “The thing about Pepperell is tradition. They know who they are and they never waver from what they do. They hit you in the mouth. Defensively, they get all 11 guys to the ball. They are a good football team.”

The Wildcats are healthy and, as of Tuesday afternoon, everybody is expected to play with the exception of Christian Garrett because of an ankle injury.