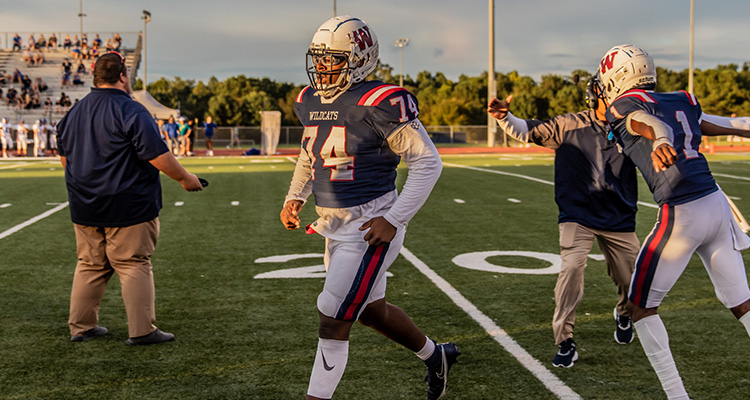 BY JAMES SWIFT
The East Paulding Raiders defeated the Woodland Wildcats 38-13 on Aug. 19.

Woodland entered the fourth quarter of the contest down 31-0. The team managed to get on the scoreboard with a long Kwadrus Wilson scoop and score on a fumble, with running back Isaiah Livsey recording a rushing score in the waning moments of the contest.

“I didn’t feel like our team had much quit in their eyes,” said Woodland High Head Football Coach Brandon Haywood. ”That’s just my challenge to them, do we tank or do we get better?”

As a 6A school with about 100 players on its roster, East Paulding certainly had some advantages over Woodland before the first snap of the game ever took place.

“We’re a 5A school with roughly 60-something kids,” Haywood said. “A lot of their kids don’t play both ways, a lot of our kids do play both ways — so we had adversity staring us in the face.”

Moving forward, Haywood said he expects to see senior leaders like Chase Carson challenge their teammates to “get the job done” on the gridiron.

“We’ve actually got to block somebody,” he said. “We were very passive tonight on the offensive side, we let people attack us — we were not the aggressors.”

Haywood said there were obvious signs of “performance anxiety” from his players for the away game in Dallas.

“I would like to run the ball, that’s the biggest ingredient of this offense that we need to do to produce,” he said. “We’ve got to try to sustain … we’ve got to continue to build confidence in what we do offensively.”

For the Wildcats to succeed this season, Haywood said the team must prove its physicality.

The Wildcats return to action Aug. 26, when the team hosts Coosa for a non-region contest.

“East Paulding didn’t define us, that game does not define us,” Haywood said. “I challenge them to dig deep and go to places that you’ve never been — and if you can’t, then I understand that this may not be the game for you or the team for you. But in doing so, I think they’re going to respond well, and I think they’re going to continue to fight and do things according to our practice schedule.”

That game is scheduled to kick off at 7:30 p.m. at 800 Old Alabama Road in Cartersville.