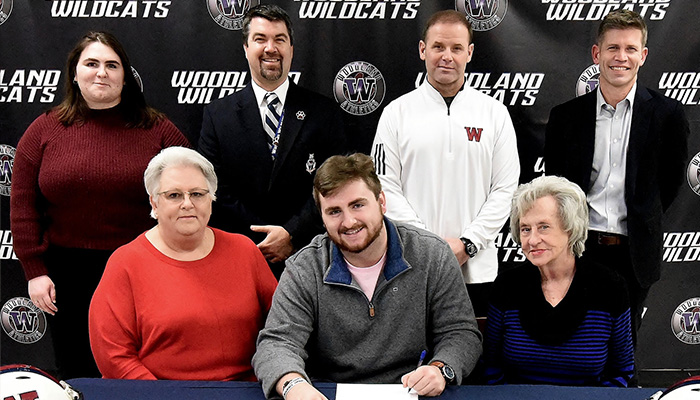 BY NICHOLAS SULLIVAN
Despite being a four-year starter at Woodland, Nick Bailey’s recruitment became “nonexistent” throughout much of his senior season.

Having been recruited by FBS schools through much of his high school career, Bailey suddenly found himself struggling to find a scholarship opportunity. Thankfully for the Wildcats lineman, Shorter head coach Zach Morrison gave him a chance to play Division-II football close to home.

“Three weeks ago, I was sitting in my room, feeling sad,” Bailey said Wednesday after signing with the Rome-based university. “I was in my feelings, thinking I wasn’t going to be able to play college football, which has always been a dream of mine.

“Then, I got the call from coach Morrison. He told me I had the offer, and it was just a blessing. I thought I wasn’t going to be able to play, and this gave me another opportunity to play football, which I’m always grateful for.”

Even still, Bailey’s recruiting adventure showcases the trickle down being felt across the sport of college football, with a player once viewed as a D-I lock becoming a steal for a D-II program.

A similarly scenario played out with Adairsville senior Courtney Slocum. A two-way standout for the Tigers, Slocum held offers from D-I programs like Bucknell and Marist but eventually opted to attend D-II Mars Hill in North Carolina.

“Grateful for the opportunity,” Slocum said. “With COVID, a lot of people didn’t get the opportunity that I’m getting to play college football at the level I’m playing at. I’m ready to get to work at Mars Hill.”

And he will be getting to work immediately.

After celebrating his signing Wednesday at home, Slocum was set to move up to Mars Hill Thursday to enroll early. He said he would begin football practice next week in hopes of contributing in the Lions’ abbreviated four-game spring schedule.

“He planned and prepared for just about every scenario,” Adairsville head coach Eric Bishop said of Slocum. “That’s why this has been able to move so fast and work out in his favor, because he has been preparing since lateJuly/early August to make that happen.”

“It will definitely ease that transition by having somebody they have a longstanding relationship with,” Bishop said of his duo. “I think that’s pretty cool.”

According to Smith, Weaver actually helped get him in contact with Morrison. Smith, who could also serve as long snapper, noted that the best friends decided together to play for the Hawks.

“It’s been me and him since middle school,” Smith said. “I’m glad to be playing with him all through high school and to keep playing with him in college. We were made together, and we’re going to stay together.”

Said Weaver, “It means the world. We’ve worked so hard to get to where we’re at right now, and it’s all about to pay off.”

Smith and Weaver held their signing ceremonies late Wednesday afternoon, making them the last of the day’s 11 signings in Bartow County. With Cartersville standouts Carlos Del Rio-Wilson (Florida), Devonte Ross (Kentucky) and Evan Slocum (Wake Forest) having made their college choices official on early signing day in December, the county is now up to 14 total college football signees this cycle.

It’s a number Bishop was pleasantly surprised to hear.

“Having talked to these coaches, I’m amazed there’s as many offers out there with this roster management problem they have going on,” he said. “The fact that we’ve had three sign this week is pretty darn amazing to me, because I didn’t know what kind of offers our kids in this area would get, outside of the big-time early signers.”

Such is the state of college athletics … at the moment and through the next several years.

Due to the COVID-19 pandemic, current collegiate athletes have been granted extra eligibility, leading to a shrinking number of spots available at every level. Plenty of deserving players will miss out because of the logjam.

“It’s not a problem that’s going to go away, and that’s the scary thought,” Bishop said. “It’s a four-year deal, for sure, and maybe five or six from the roster-management standpoint.”

“It’s really made it hard for these kids to get signed,” Plott said of the situation. “Every college coach I’ve talked to has talked about how kids are falling. Whether they’re falling from Division I to FCS or FCS to Division II or whatever. It’s been real difficult to find people homes.

“We’re real fortunate that we got both of these guys a place they feel comfortable, and we’re excited for them.”

While Bailey will remain in the area, Eli Jernigan — the other Wildcats signee — had to head north to find a spot at D-III Ohio Wesleyan.

However, Jernigan doesn’t mind venturing outside his comfort zone to continue his football career. In fact, it’s exactly the type of opportunity he sought.

“I’ve always wanted to leave Cartersville, ever since I was little,” Jernigan said. “I was born and raised here, and I think it’s time for a little change of scenery.

“Sure, I say I’m going to fine, but I’m really going to miss my family, my friends, home-cooked meals and stuff like that. Once I get up there and adjust, I think I’ll be alright.”

While Bailey and Jernigan couldn’t be more opposite in appearance — with the former listed at 6-foot-3, 270 pounds and the latter checking in at 5-9, 155 — Plott noted that both individuals will be greatly missed.

“They brought different skillsets to the table,” Plott said. “Nick is very talented, big and strong, and athletic. Eli had the heart of a lion and was relentless. We knew we could count on him each week. …

“It’s that type of leadership that we’ll have a hard time replacing.”

One way or another, Woodland was going to have to replace Bailey, Jernigan and its other seniors. Ditto for Adairsville and its Class of 2021.

But it makes saying goodbye much easier, knowing that some will get a chance to keep playing the game that they love.

As Bailey put it, “This is probably one of the best days I’ve ever had.”