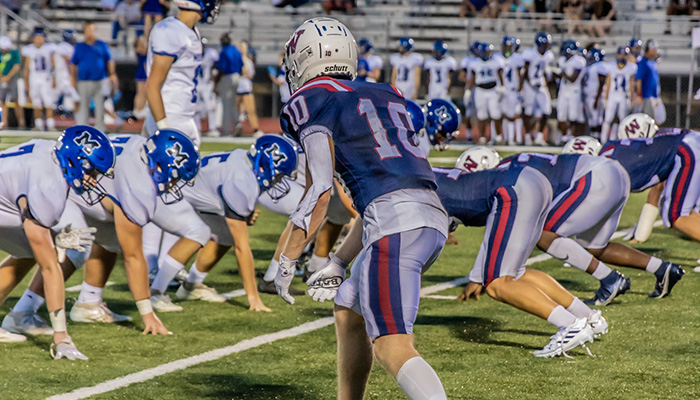 BY SCOTT POWER
A poor week of practice for Woodland, despite a good effort, resulted in a 17-14 loss to visiting non-region foe Model on Sept. 2.

The Wildcats scored first on a short burst by Chase Carson. The Blue Devils tied the game up 7-7 in the second quarter, but Woodland’s Isaiah Livsey thrilled the Wildcat crowd by taking the ensuing kickoff back for a touchdown.

The Wildcats were up 14-7 but Model responded with a 14-play drive that took up most of the third quarter and tied the game 14-14. Neither team scored in the fourth quarter and the game went to overtime.

Disaster struck the Wildcats in their only overtime possession, with a pass being tipped at the line of scrimmage and intercepted. Woodland only gave up six more yards, but the Blue Devils kicked a 26-yard field goal to win the game 17-14.

Woodland Coach Brandon Haywood said he didn’t think his team prepared as well as it should have this week.

“It’s very tough (to lose a game in overtime), but it’s not surprising,” Haywood said. “I told my team all week that we didn’t practice well. When we don’t practice well you are going to lose. Yes, we won last week, but one win doesn’t solidify us. We are trying to win as many games as possible and we can’t get caught up in one victory.”

The Wildcats trounced Coosa on Aug. 26 and Haywood said his team was still thinking about last week instead of focusing on this week.

While Haywood was disappointed in his team’s lack of focus during practice this week, he complimented Model.

The Wildcats took the opening kickoff and marched their way downfield in three plays. Brelace Williams started off the drive with a long pass to Keve Porter and then another completion to Jaeden Smith put the ball on the Model 2. Carson then punched the ball in from there to make it 7-0 after Nick Miranda’s extra point was good.

The Woodland defense then came up with a turnover as Livsey came up with an interception. That drive, however, stalled out because of three penalties.

Woodland’s defense then came up big again as Model drove the ball down near the Wildcat 5 where Model went for it on fourth and six. The Wildcats stuffed a running play for minus three yards.

The two teams then traded turnovers with Woodland’s Jamarion Walker coming away with an interception early in the second quarter.

Model later tied the game at 7-7 with on a touchdown with 7:09 left in the first half.

That tie didn’t last long, however. as Livsey took the ensuing kickoff back about 65 yards for the score to put the Wildcats up 14-7.

The Blue Devils started the third quarter by pounding out a 13-play drive, all of which were runs. The final play was a seven-yard touchdown run to tie the game 14-14 with 5:16 left in the third.

Woodland had its own long drive that ended early in the fourth quarter on a failed fourth down conversion.

Woodland got the ball first on the 15 yard-line once overtime play began. On the second play of OT, a pass was tipped at the line of scrimmage and was intercepted by Model.

Woodland’s defense forced a third and four, but the Blue Devils elected to try a 26-yard field goal and made it to earn the win.

The Wildcats had chances to break open the game, just missing on a couple of long passes. But they ultimately made too many mistakes.

“We almost popped a couple (of big plays),” Haywood said. “We had a couple of drops. A couple of overthrows. What really hurt us was our self-inflicted wounds. We dropped a big one, and we picked up a big first down and had it brought back on a penalty.”

Livsey led the Wildcats in rushing with 54 yards on 14 carries. He also had a 65-yard kickoff return.

Williams was 7 of 12 for 97 yards passing, but threw two interceptions, though one was definitely not his fault as the pass was tipped at the line of scrimmage.

The Wildcats travel to Pepperell next Friday for a 7:30 p.m. kickoff in a non-region matchup.

“They beat Model 15-14 last week so it will be another tough one,” Haywood said.