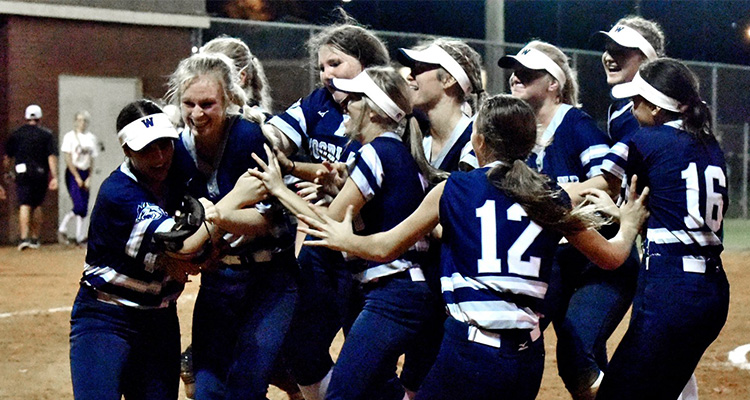 The box score was as even as it could be with Woodland having 10 hits and the Lady Catamounts with nine, while both teams committed a pair of errors.

The game was tied 5-5 going to the ninth when the Lady Wildcats scored twice to go up 7-5 in a sacrifice fly by Haley Collum and an RBI single by Kamryn Smith.

Dalton added a single run in the bottom of the inning, but Ashlyn Baines ended the threat to earn the save.

Dalton opened the scoring in the second inning on a solo home run, but Woodland took the lead in the third. Mackenzie Araya led off the top of the third with a single and advanced on a fielder’s choice by Baines. A single by Jordan Hammonds and a Dalton error scored Araya.

Dalton later took a 3-2 lead in the sixth and Woodland tied the game on a double by Peyton Dorn that scored Hammonds. The Lady Wildcats then regained the lead in the eighth on a two-run homer by Smith that put Woodland up 5-3.

Dalton tied the game 5-5 in the bottom of the 8th inning.

The Lady Wildcats again went back on top 7-5 with a pair of runs in the ninth on a sacrifice fly by Collum and an RBI single by Smith. Dalton managed to make it 7-6 and had a runner on third with two outs. Baines struck out the final batter to give Woodland the win.

Smith, a freshman, went 3-for-5 with a home run, three RBIs and scored a run. Hammonds, a sophomore, went 4-for-4 with three runs scored.

Baines got the save for her one inning of work. She didn’t give up a run or a hit and struck out one.