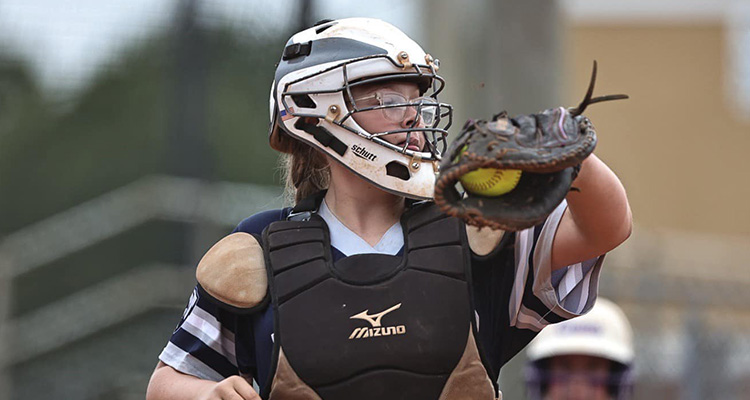 BY SCOTT POWER
Walks and errors played a pivotal part of Tuesday’s shootout between Woodland and Cartersville. When the dust settled, the Wildcats emerged as the 12-11 victors between the two region rivals.

Woodland Coach Todd Eubanks praised both teams for their effort, but said his teams showed a lot of fight after being down early, coming back to take the lead only to see Cartersville retake the lead before the Lady Wildcats jumped ahead to stay late.

“Both teams showed some resiliency,” Eubanks said. “Both teams had to make some adjustments throughout the game. Kamryn Smith and Carrington both had big hits for us that drove in some RBIs. We went through three pitchers tonight and our junior, Peyton Dorn, nailed down it down. That showed a lot of maturity on her part.”

Eubanks said the contest felt almost like a playoff game with every pitch being an important one and every play a potential game breaker.

Cartersville Coach Glen Woodard agreed that his team didn’t give up, but was disappointed in his team’s pitching performance. Lady Canes pitchers walked 12 batters.

“We walked way too many batters,” Woodward said. “Our pitching staff has got to throw strikes. We score 11 runs, we should win the game every time. Our kids kept fighting, we played hard to the end, but we can’t walk that many batters.”

Cartersville took an early lead in the bottom of the first inning on and RBI single by Ava Perkins and then a three-run line drive homer over the centerfield fence by Jordan Bishop.

Woodland then sent 12 batters to the plate in the third and forced Cartersville to change pitchers twice in the inning.

Cartersville closed the gap to 7-5 in the fourth on an RBI double by Erin McCary.

The Lady Canes then took the lead in the fifth a sacrifice fly by Perkins, Arnold stealing home as Mikey Lewis stole second, an RBI single by McKinley Chada, Bishop scoring from third on a passed ball and Elizabeth Nelson’s RBI single.

Cartersville sent 11 batters to the plate in the inning, scoring five runs on two hits, to take an 10-7 lead.

The Lady Canes extended their lead to 11-7 in the sixth on an RBI double by Lewis.

Woodland bounced back to regain the lead for good in the top of the seventh.

Elizabeth Hartsfield doubled in a run and then Hammonds reached safely on an error, which allowed Carnes to score and cut Cartersville’s lead to 11-9.

Then Carrington reached singled and an error on the play, allowed Bailey Gerstner, Hammonds and Dorn to score and put the Lady Wildcats up 12-11.

Cartersville had its chance to tie or take the lead in the bottom of the seventh as it had runners on first and second with two out. Dorn was able to induce a pop up, however, to end the game.

The Lady Wildcats finished with 12 runs on seven hits. Nobody had more than one hit for Woodland, but Carrington drove in six RBIs and Hammonds drove in two runs. Harsfield and Carrington each doubled.

Collum pitched the first four innings for the Lady Wildcats. She gave up six runs on seven hits while walking two and striking out five. Ashlyn Baines then pitched 1/3 of an inning, giving up three runs.

Dorn then pitched the final 2 2/3 innings, giving up two runs on three hits while striking one and walking three.

Lewis and Callan each stop a pair bases while Reese Dumas, Arnold and Chada each swiped one.