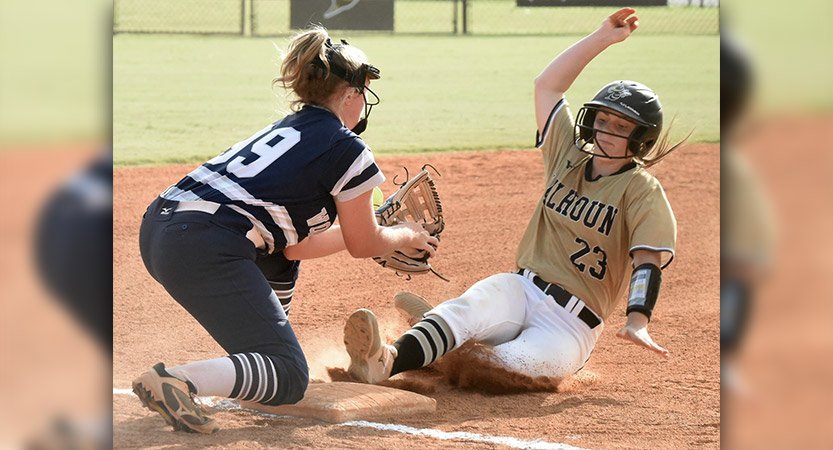 Woodland’s chances of a Region 7-AAAAA championship likely went out the window, or rather over the fence, as Calhoun launched eight home runs in a doubleheader sweep Thursday in Gordon County.

The Wildcats hung tough despite serving up the long balls, but it was too much to overcome in losses of 6-5 and 7-3. With the defeats, Woodland falls to 7-3 in the region — good enough for second in the league. The Wildcats are a half game ahead of Cass and own the head-to-head tiebreaker over the Colonels.

While earning the No. 2 seed and the home playoff series that comes with it would be huge, Woodland (13-6 overall) saw its chances of landing the top spot in the region take a massive hit Thursday. Calhoun is now 8-0 in the region and has the tiebreaker over the Wildcats.

Woodland outhit the hosts in the first game by a 10-7 margin. However, three of those seven hits left the yard. The Yellow Jackets homered in the third, fourth and fifth innings. The last of the three hurt the most, as it proved to be the difference.

The Wildcats had clawed their way back into the game in the top of the fifth. Morgan Cooper had a two-run single, and Kailey Baker drove in a run with a hit to pull Woodland within 4-3.

But a two-run shot by University of Georgia commit Lyndi Rae Davis gave the Jackets much needed insurance, making Hannah Miller’s two-run homer in the top of the seventh moot.

Lainey Baker struck out seven and walked none, but it wasn’t enough to counter the trio of homers.

In Game 2, Cassie Jones pitched well through the first five innings, limiting Calhoun to three runs on eight hits. But the first three batters and four of the first five homered to begin the sixth inning, forcing Woodland to bring Lainey Baker back in to close out the frame.

The Wildcats entered the home half of the sixth down just 3-2. It was actually a tie game in the fifth after Cooper doubled home Ansley Evans and later scored herself on a passed ball.

A couple of errors allowed Evans to score a consolation run in the top of the seventh. The senior had a phenomenal game, finishing 3-for-3 with two doubles and two runs scored. She also scored a run in the opener. Miller led the Woodland offense in that one, going 4-for-4 with a double and the home run.

The Wildcats will look to bounce back Tuesday, when they travel to face Blessed Trinity in Roswell.