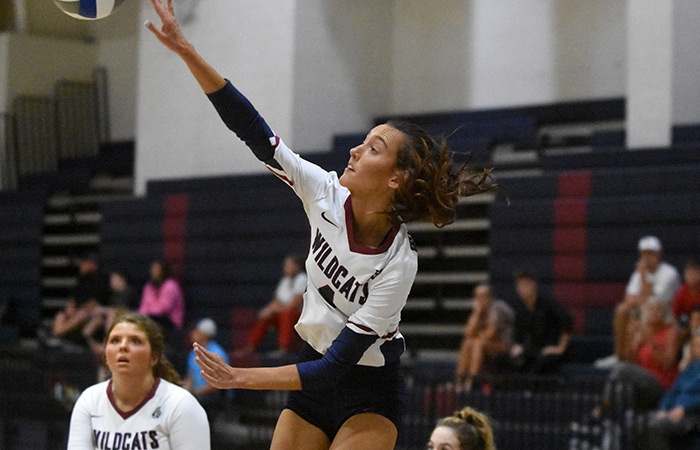 The 2021 high school volleyball season in Bartow County saw every program improve or at least maintain its level of success from the previous fall.

Adairsville’s rise to power in Area 6-3A and the area, at large, wound up being the story of the year. The Tigers’ turnaround under head coach Kailey Vaughn Martin continued with a big step forward.

In one of the best seasons in program history, Adairsville finished 24-16-1, placed third in the area regular-season standings and gave one of Class 3A’s top teams, Oconee County, a challenge in the opening round of the postseason.

For Cartersville (26-12) and Cass (7-17-1), second-year head coaches Alicen Pearson and Laura Hayes saw their teams essentially match their 2020 results, albeit with some improvements.

The Canes again fell in the second round of the Class 5A state playoffs but did so after placing runner-up in Region 7-5A, as opposed to third the year prior. Meanwhile, the Colonels came up just short of a postseason bid for the second straight year. However, Hayes’ group did put together some strong showings, particularly reaching the semifinals of a tournament in Rockmart.

Overall, Woodland (10-33) didn’t have nearly as good of a record as last year. But the Wildcats still managed to gut out a region tournament win over the rival Colonels to help clinch a state playoff berth for the second consecutive campaign.

Most years, picking a player of the year is pretty easy. Either going into the season or early in the campaign, one player rises above the rest and maintains that spot for the remainder of the year. In 2021, though, depth proved to be the most prominent feature of Bartow volleyball. As such, selecting a POY became a difficult task. There were more than a few players with compelling cases, but Childers earned this spot due to an all-around game that went unmatched in the county. During her final season with the Tigers, Childers finished with just under 100 kills. She added 44 aces and 15 blocks, while racking up 241 digs. If those numbers don’t seem overly impressive, consider that Childers did all of this while serving as Adairsville’s primary setter — a role that saw her dish out 208 assists.

Richlyn Blair, Adairsville junior — After earning honorable-mention recognition last year, Blair helped push Adairsville into the state playoffs. She paced the team with 154 kills and 79 aces, while also racking up 142 digs. With a big senior class, Blair will be the top returner for the Tigers, who will look to build off of an impressive season.

Bailey Elrod, Cass senior — The Colonels’ reigning team MVP, Elrod helped anchor the Cass defense with her work along the back row. Elrod’s digs were part of the reason the Colonels landed a top-four seed in the region tournament. She was the lone Cass player to receive an all-region selection.

Ailee England, Cartersville sophomore — The top 10th-grader in the county and one of the early favorites for 2022 player of the year, England totaled a county-high 218 kills on a 0.252 hitting percentage. She also contributed 114 digs and 65 aces. England racked up 18 kills in the first round of the state playoffs.

Lauren Lawson, Cartersville junior — After not playing for the Canes last fall, Lawson burst onto the scene this year with an all-region season. Already committed to Grand Canyon University to play sand volleyball, Lawson struggled a bit down the stretch but still managed to record 157 kills with a hitting percentage of 0.214.

London Moultrie, Cartersville senior — An all-region member, Moultrie closed out her Canes career with 190 kills. While she didn’t reach the overall numbers (267 kills) of her junior campaign, due in part to a more balanced team around her, Moultrie proved to be consistent and stepped up in the postseason with 15 total kills.

Mia Nicklas, Cartersville junior — Coming off a sophomore season that saw her rack up 191 kills, Nicklas showed off her versatility by taking over Cartersville’s libero role, where she contributed 440 serve receives. That position switch also saw Nicklas increase her digs total from 213 to 248. She even added 61 aces.

Kya Perkinson, Cass senior — Cass’ most consistent hitter, Perkinson put together some impressive offensive displays throughout the season, with a particularly strong showing in the Rockmart tournament. Perkinson’s ability to hit from the outside or through the middle helped solidify the Colonels attack.

Delaney Tuplin, Woodland senior — In the wake of losing Sydney Molinaro and Emmalee Cigainero to graduation, Tuplin stepped up mightily to lead the Wildcats back to the postseason. In her swan song, the outside hitter contributed 172 kills, 127 digs, 30 aces and 13 blocks en route to being named an all-region selection.

Madison West, Woodland junior — After Tuplin, Woodland rotated through a handful of second-best players in any given match. West seemed to assume the role more often than her teammates, as the junior middle finished with 96 kills, 67 digs, 54 aces, 28 assists and 21 blocks. She could fill Tuplin’s role next year.