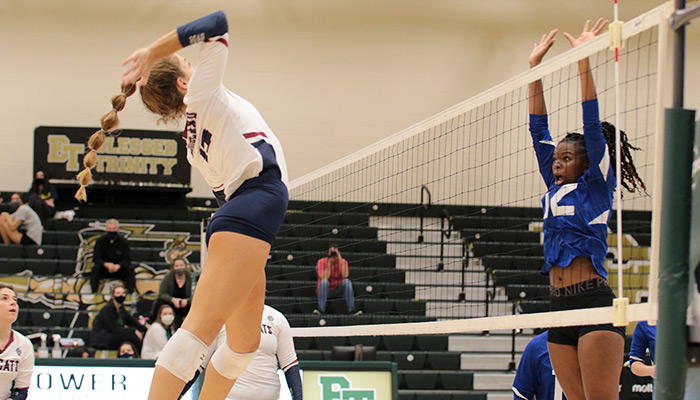 STAFF REPORT
Between COVID-19 impacting everyone and new coaches for half of the teams, the 2020 season wound up being quite the roller coaster for Bartow County volleyball.

Adairsville experienced vast improvement under head coach Kailey Vaughn Martin. The Tigers were at or above .500 for a significant portion of the year before finishing 15-25. That’s more victories than the program produced in total from 2017-19.

First-year head coach Alicen Pearson guided Cartersville to yet another county championship, as well as into the second round of the Class 5A state tournament. However, the Canes (28-15-1) ran into issues with COVID-19 — namely, some key starters being quarantined — that contributed to the playoff exit.

Cass, likewise, hired a new head coach, promoting assistant Laura Hayes. She was put in a difficult spot in the preseason. Things didn’t get much better during the regular season, as the Colonels often played shorthanded, particularly early in the year, due to players in quarantine.

Woodland struggled for consistency through much of the regular season, with the coronavirus playing a factor, but the Wildcats improved significantly down the stretch. To cap it off, Woodland and head coach David Condon punched a ticket to the state playoffs for the first time in program history.

In this space last year, it was written that Molinaro “will have an excellent chance to earn Player of the Year selection.” She rose to the challenge. Simply put, Molinaro did it all for Woodland in 2020. And she did it all incredibly well. There is nary a weakness in her overall game, and Molinaro often served the role of an assistant coach with her leadership ability. One of the top athletes to come through the county in years, Molinaro set a school record with 369 kills. She also contributed 232 digs, 164 assists, 67 aces and 41 blocks this season to earn first-team all-Region 7-AAAAA honors. In her career, the senior finished as the school’s all-time leader in kills, aces, matches played and sets played. She capped it off by making history in leading Woodland to its first-ever state playoff appearance. As Condon put it, “Probably the best overall player to come through our program.”

Aaliyah Applin, Adairsville senior — One of only two returners to this list from the 2019 season, along with Molinaro, Applin remained a consistent presence on the back row for the Tigers. In helping the program improve by leaps and bounds this season, she finished with 209 digs and an 84% serve receive percentage in securing all-Region 6-AAA honors. Said Vaughn Martin, “Aaliyah’s servant leadership has paved the way for a new age in Adairsville volleyball.”

Emmalee Cigainero, Woodland senior — While Molinaro deservedly received plenty of plaudits this season, Cigainero proved to be vital in helping the Wildcats get into the state tournament for the first time. She set a school record with 372 digs, and not only were her 653 serve receive attempts the highest in program history but also her successful serve receive percentage of 87.29 was the best ever at Woodland. She also owns career records in those three categories.

Layne Condra, Cartersville junior — While the Canes had several solid defensive players, Condra was chief among them, wrapping up her junior season with 199 digs and 288 serve receives. She would have likely posted 200-plus digs and 300-plus serve receives if she hadn’t been forced to miss Cartersville’s second-round state match due to quarantine. Pearson said Condra, who is also a standout sand volleyball player, has “the most perfect passing form I’ve seen.”

Bailey Elrod, Cass junior — One of the biggest bright spots of a sometimes difficult debut season for Hayes proved to be Elrod — the fourth libero to receive all-county honors. Voted the team’s MVP this season, Elrod was “consistently there for her teammates,” said Hayes. The Colonels had several juniors — including Elrod, Hannah Komp and Chloe McMillan — who should be back next year after showing plenty of promise over the course of the season.

London Moultrie, Cartersville junior — The latest in an impressive line of Canes outside hitters, Moultrie finished with 267 kills and 25 total blocks. The junior’s defensive ability (96 serve receives and 65 digs) allows her to stay on the court throughout rotations, and her back-row attacks are extremely effective. Almost certainly the most athletic player in the county, Moultrie will be expected to help lead Cartersville on a deep playoff run next fall.

Mia Nicklas, Cartersville sophomore — Nicklas is a superb all-around player. The youngest player on the all-county team, the sophomore recorded 191 kills, 213 digs and 181 successful serve receives this year. Nicklas even added 70 aces. She was slowed down by an injured hand for a portion of the season but battled through it. Pearson called Nicklas the hardest working player she’s met in a long time. With two years left, there’s a possibility that Nicklas is a future Player of the Year.

Delaney Tuplin, Woodland junior — With the Wildcats set to lose two of the best players in the history of the program, Tuplin (along with fellow junior Cayley Stanz) will be expected to help fill the void in 2021. Based on her contributions this season, Tuplin should be able to step up. She finished with strong numbers across the board, including 119 kills, 94 digs, 42 aces and 16 blocks. She also chipped in with a few assists and strong serve and serve receive percentages.

Macey Vaughn, Cartersville senior — Vaughn probably would have been Player of the Year had Molinaro — Vaughn’s former teammate her time at Woodland — not put together such an incredible season. The senior setter racked up 561 assists on the season to go with 128 digs and 36 aces. Unfortunately for the Canes, Vaughn was forced to miss both state tournament matches due to quarantine. “Her dedication and love for the team and sport is unbelievable,” Pearson said.