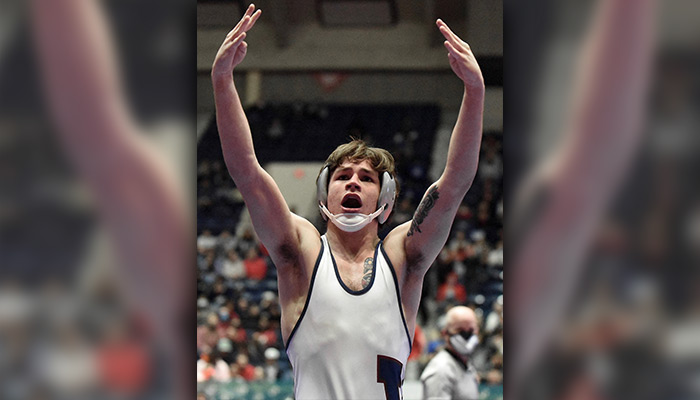 STAFF REPORT
The ability for the Bartow County wrestling programs to collectively keep improving is quite remarkable.

Last year in this space, it was posited that the 2019-20 season was “arguably the greatest high school campaign to date for wrestling” in the county. And it’s not a stretch to say this season surpassed that.

For the third straight year, Woodland doubled up as duals and traditional Class 5A team champion. Cass finished runner-up in both events.

Individually, a stunning eight locals earned state titles. It makes picking an all-county team a difficult task, as the honorable-mention list boasts a collection of talent that most counties would envy.

Picking a wrestler of the year is rarely an easy decision, but when there are eight individual state champions, including five who capped undefeated seasons, it’s a nearly impossible task. Even though McCrary wasn’t one of the unbeaten title winners, finishing 18-1, the University of North Carolina signee did manage to complete his time with the Wildcats by claiming a rare fourth individual crown. McCrary became the second wrestler in county history to win four state titles, joining Woodland legend Kyle Gollhofer. Ranked eighth in the country, McCrary closed out his high school career with a 167-2 record, including a perfect mark in Georgia.

A tough call right off the bat at one of the county’s strongest weight classes. Owens and Woodland’s Hayden Santora both placed third at state, while Cartersville’s Eaiden Neal and Cass’ Morgan Thompkins are also strong wrestlers. Owens benefits from a larger sample size, having won 48 of 57 matches.

The first of five nationally ranked wrestlers on this list, which tells you all you need to know about the top-tier talent in the county, Crapps came up short in his pursuit of a state title. However, he still enjoyed an extremely successful freshman year. Crapps finished 31-2 and placed third at state.

For our purposes, we typically select just one wrestler at each weight class for the all-county team. But we aren’t going to subject a state champion to honorable mention. Nope. That’s where we draw the line. The nationally ranked Hunt went undefeated with 18 pins in 19 matches, while Linley finished 41-5.

Kresho narrowly missed out on a second straight individual state championship, falling in the finals. A strong leader for the still young Colonels, the junior wound up 22-3 overall. After losing to Woodland’s Easton Bishop in the Region 7-AAAAA duals title match, Kresho beat him in their next two matchups.

Another ridiculously difficult decision, as Buchanan and Cass’ Eli Doolittle both had stellar seasons. Although Doolittle had the better state traditional finish (2nd vs. 4th), Buchanan’s head-to-head victory in the duals state championship match — which helped flip the momentum — served as the tiebreaker.

While McCrary was undoubtedly the top 138-pound wrestler in the county and classification, McKnight is a worthy runner-up in both regards. Considering he was in the same bracket as McCrary, the sophomore, who finished 20-10 overall, did as well as possible at state in reaching the title match.

Despite competing in, admittedly, one of the weaker weight classes in the county, where only two of the four teams produced a state-qualifier, Urizar (26-9) certainly earned a spot on the all-county team. Finishing fourth at the traditional, he rounded out his Cass career with a second state-placer showing.

This is the second weight class to include a pair of state champions. Ranked No. 2 in the country, Henson (23-0) rather easily produced his second consecutive unbeaten season to win back-to-back state titles. Meanwhile, Cornett, who finished runner-up at 160 last year, completed a 52-1 senior season.

Yet another undefeated state champion, Cochran claimed his first title with a victory over Cass’ Zach McKnight, capping off a 23-0 season. After finishing runner-up last season, Cochran finished the job this time around. He’ll look to close out his Woodland career with another unbeaten campaign.

Cartersville put together a strong season, particularly in the upper weight classes, and Locklear becomes the first Cane to make the all-county list. The region runner-up finished 11-4 overall and fell to the eventual state champion in the quarterfinals. Locklear edged Adairsville’s Druu Faulk for this spot.

Rhodes (13-7) didn’t have the strongest showing at the state traditional, finishing 1-2 after a first-round bye, but both losses were narrow decisions for the region champ. This was another difficult choice, as Adairsville’s Jaimon Long had a phenomenal freshman season. Both could be state-placers in 2022.

Currently ranked seventh in the nation, Smith absolutely cruised to his third straight state title. The University of Maryland signee finished his career with a 17-0 season. Smith needed less than 45 seconds to pin each of his state traditional opponents, including just 23 seconds to win the finals.

Hoffmeier produced one of the most dominant seasons the county has ever seen. He wrestled just 15 times during the atypical campaign but pinned every single foe. Having battled injuries during his junior year, Hoffmeier bounced back this season en route to his second career state championship.

For the second straight season, Hurst earned the county’s heavyweight title. He improved greatly this year. After entering the 4A state traditional tournament as a No. 8 seed in 2020, Hurst (12-2) reached the finals this time around. He came up just short but should be among the favorites his senior season.